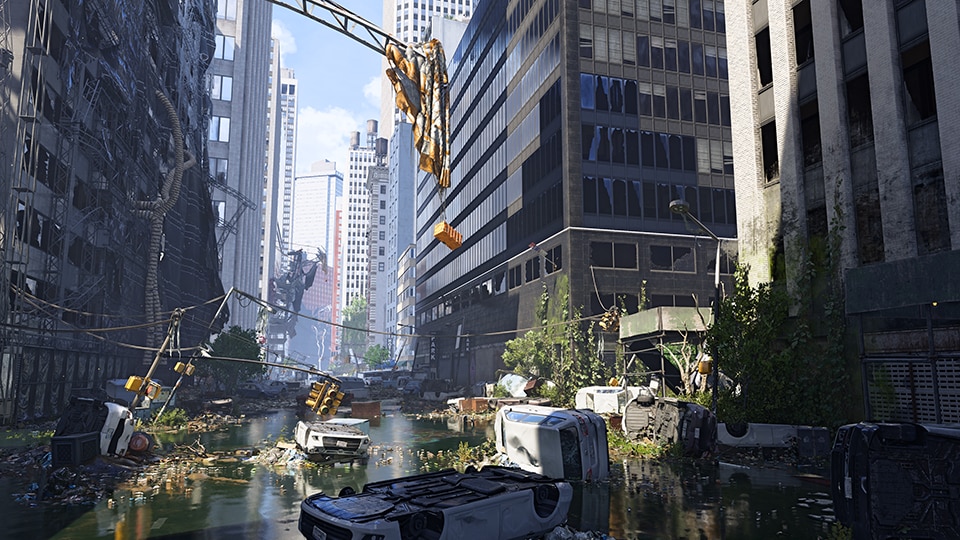 The Division 2 Warlords of New York expansion will feature a variety of end-game activities, introducing loads of new content and putting a fresh twist on the missions you already know and love in order to overhaul the enjoyment of the game.

Warlords of New York adds a number of features meant to improve re-playability in the end-game: Seasons, Directives, Global Difficulty, Legendary Difficulty and SHD Levels. Seasons act as a calendar of activities that ensures you have fresh set of objectives to tackle on a weekly basis. Completing the manhunt and locating the final target will entail a multi-phase journey of taking down targets across new and old locales, discovering new gameplay opportunities and uncovering new narrative secrets as you progress through the pursuit. Seasonal XP can come from any source, and upon achieving Season Levels, players can expect a multitude of rewards, one of them an exclusive Skill Mod from finishing the Manhunt and taking down the primary target. But don’t get too comfortable, between Global Events, Leagues, and more targets to track down, Agents will never be idle for long. 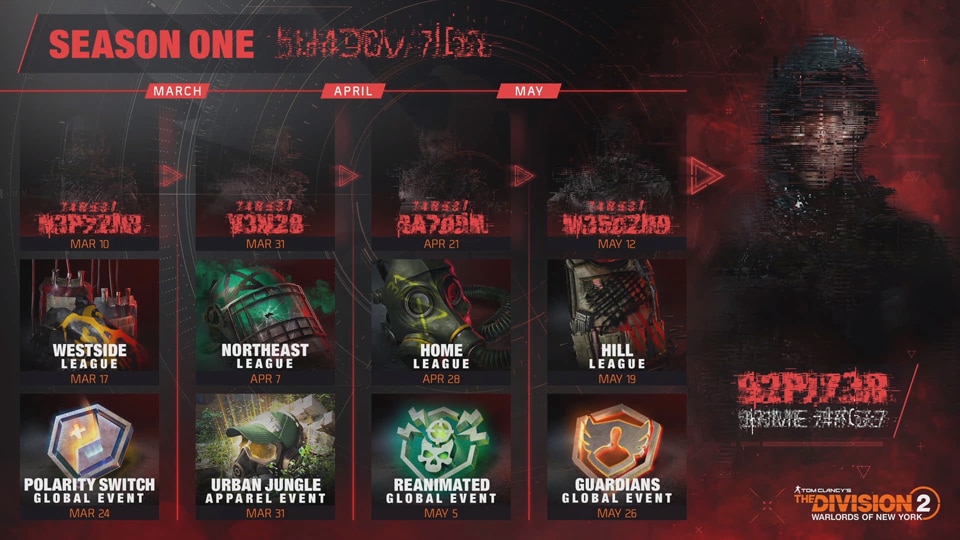 Warlords of New York will also feature Directives, customizable modifiers that you can activate to add a bit of spice to Missions, try new gameplay styles, seek out an even tougher challenge… and of course help get more XP for those Seasonal Rewards.

Additionally, SHD Levels will provide a progression route that steadily rewards max-level players with core upgrades to their Agent. Whether you’re active every day and blazing through Seasons and Directives for massive XP or dropping in for a couple hours when you can, your efforts will lead to notable upgrades on your Agents’ most valued attributes. SHD Levels are account bound and progress will be made on any Level 40 Agent you have. We’ll also be adding new commendations and trophies/achievements for all the high-score hunters in the Division.

With the new addition of Global Difficulty, you will be able to set the baseline difficulty of the entire open world at once, from Normal all the way up to Heroic. Meaning, for example that Control Points can be set to Level 2, 3, or 4 as a standard, rather than building to that difficulty. Global Difficulty will impact the living world activities and wandering enemies that appear within the open-world area. Everything from Hostages, to Propaganda, and Convoys will always scale to the selected difficulty. Along with this new feature comes the ability to reset the entire open world at any time, if you wish to do so.

But be careful, changing the Global Difficulty once already engaged in an activity will not change the enemies you’re fighting – make sure you know what you’re getting into and are prepared for the fight ahead.

Global Difficulty will also apply to all missions and bounties, meaning that there are even more options for Heroic-difficulty content, and a more seamless way to have a consistent challenge throughout all that The Division 2 has to offer. Having a narrow field of Heroic Bounty options or seeking out Heroic missions will become a thing of the past!

However, if you’d prefer to keep the difficulty of various activities different, as it is without Global Difficulty, the option can be turned off entirely. Remember with all gameplay activities that higher difficulty content will have better chances for giving stronger gear, so see if you can push yourself to that next level higher for even better rewards!

A select number of main faction strongholds are upping the ante with a new Legendary difficulty. These incredibly challenging missions will be available to Agents who have reached Level 40 and will put your tactics, skill, and mettle to the test. With an improved AI and a never before-seen selection of elite Black Tusk forces, even the most battle-hardened veterans will have to use every tool in their arsenal to complete the revisited strongholds. As a reward, Legendary missions will feature some of the best gear available to Level 40 Agents; a tougher fight for a better prize.

Legendary Difficulty will be available on the faction strongholds:

Title Update 8 brings with it some substantial changes to how players will approach the Dark Zone.

Contaminated loot will be both easier to discern in quality, as we are making rolls and stats visible before extracting them; and more frequent, as every item found in the Dark Zone will once again need to be extracted in order to be acquired. To balance out this change, we are also adding an additional extraction site into each of the Washington D.C. Dark Zones.

Dark Zone levels and XP will only be acquired through interactions between players and completion of certain objectives like extracting gear successfully, and collecting supply drops while in the DZ. Confrontations between players, either through kills or stealing their loot, will also reward an entirely new currency for the DZ. Additionally, the non-confrontational ‘Grey Rogue’ status is being removed and it will be faster and easier to disavow the Division and go Rogue on a whim.

The DZ will be set to open mic VOIP by default, with an option to set it to Team Only or disabled altogether. Players will also be able to see all other Agents within 100 meters of them in their current DZ via the social menu.

Signature weapons and their individual ammo are being entirely removed from the DZ, though the different bonuses and skills from the Specializations will still be present and effective. Specialization weapons will still appear on your Agent, as a visual shorthand to others of what your build might entail, but the weapon itself will not be accessible and
ammunition for it will not drop.

All agents will be able to play together in the DZ, with Level 30 Agents scaling up to match with the Level 40 Agents in the area. All these changes and more are in pursuit of making the Dark Zone feel more rewarding for what the Dark Zone is known for; hectic and tense PvEvP fights where a presumed ally or NPC alike might get the drop on you and turn a standard firefight into a fight for your life.

For those that enjoyed our previous Hunter puzzles we also have good news. We’re adding more encounters and puzzles, both in New York and Washington D.C. Not only will you face the iconic Hunters but we also upped the difficulty to give you more extreme challenges. They of course will offer unique rewards. But Hunters are not the only ones targeting agents. Always keep your eyes open, weapons at the ready, you never know who’s watching your every move, Agent…

Last but not least, New York and Washington will have more of what you’d expect, loot. New weapons, gear, brands, gear-set, named weapons, all up for grabs. Not only have we improved the readability of loot, to make it easier to identify what items are better than others, we also focused our balance efforts to make as many builds viable as possible. It will allow you more freedom when thinking about your agent’s role. Do you want to support your group? Use crowd-control to help your group tackle the most difficult missions? Warlords of New York will have more options and better accessibility to get started, make steps towards your chosen build and finish it! Additionally, the new

Recalibration library will allow you to store attributes and talents, making the inventory management much simpler as you don’t have to keep track of as many items as before and immediately identify if you have a better roll already available in your library.

One last thing we want to mention is that while you will see a little less loot, it will be vastly improved. That will allow you to get an upgrade more easily and reduce the number of items you don’t want to keep significantly. And, if you’re up for the challenge, harder content will always drop better attribute rolls. Are you ready to take on those five active
Directives Legendary Missions?

Warlords of New York will launch on March 3rd on XB1, PS4, and PC. We can’t wait to see you at the endgame and beyond, Agents. Happy hunting!